Each summer in Texas brings high temperatures and dry weather conditions. Just a few years ago Texas saw one of the worst droughts in state history. Many large property owners also saw losses in the form of lost crops due to such little rainfall. Many residents noted that local vegetation appeared to dry out 3 or 4 months earlier than normal. While most properties in Texas suffered from some form of water loss, those properties that had rooftop rainwater collection systems and the appropriate storage capacity were much better suited to weather out the dry conditions. The size and capacity of the systems can be calculated by your local roofer, based on its intended usage. This multi-part blog series will cover the calculation of rainwater collection systems. 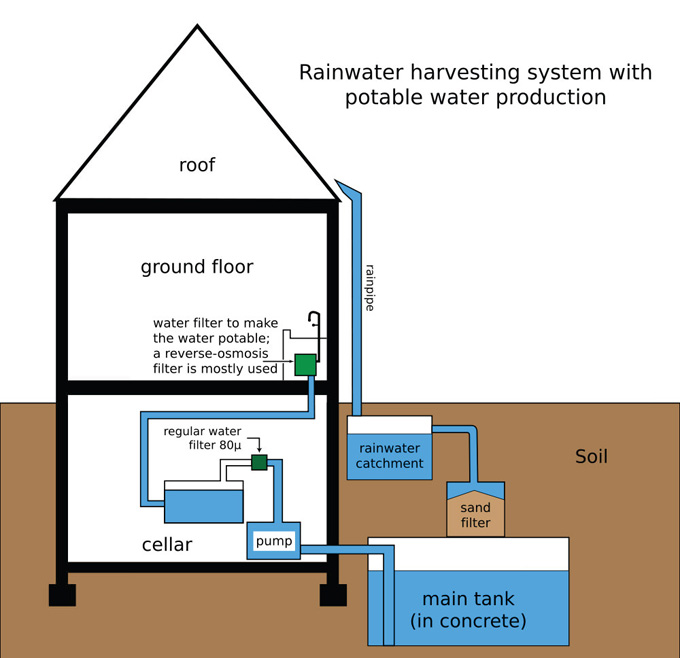 Indoor or Outdoor Water Use

If the water collection system on your roof is the primary water source for the home, then the system should be sized according to the longest anticipated period without rain. As we saw in the drought conditions from just a few years ago, this could be months. Based on almanac data from 1980-2010, Montgomery, TX receives approximately 47.7 inches of rain per year. The area also receives over 61 days a year with measurable precipitation.

Median rainfall numbers tend to be a better indicator of total rainwater collection than average rainfall. That is because short and heavy rains can cause a sudden downpour in which 100% water collection is never achieved. These short periods of rainfall, also the cause of flash flooding, drives the average rainfall up, but most of that additional water is rarely collected.

According to the Texas Manual on Rainwater Harvesting, the median rainfall for Montgomery, TX in July 0f 2012 was only 1.79 inches. This means that in July of 2012 a homeowner might have had to use water stored from the previous month to make up for the lack of rain in July.

Median rainfall can be estimated using standardized data from the US Department of Agriculture, the State of Texas, and other official sources. However, because this number is a more detailed and specific precipitation type and amount, your local roofing company should look this information up at the time of request for the latest and best data available.

Media rainfall must be estimated before deciding on the storage capacity of the water collection system or else homeowners risk spending too much on the collection tank or risk losing excess water as runoff because the tank was too small to meet the needs of the home.

Part 2 to be continued.