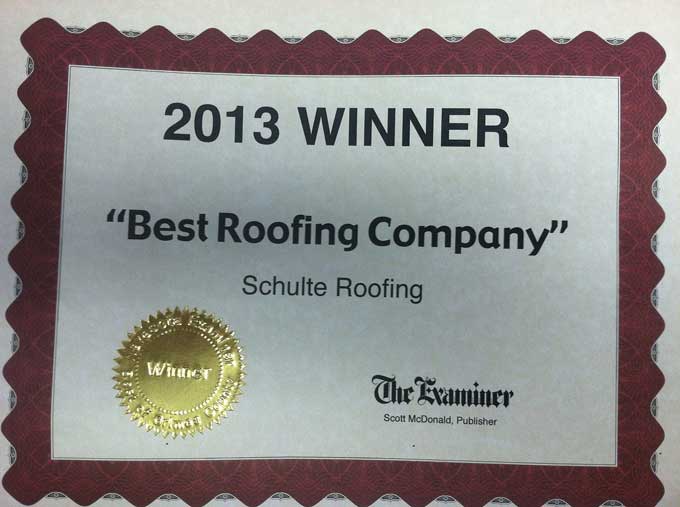 Just recently Schulte Roofing won the award of Best Roofing Company in Grimes County, by The Navasota Examiner.  The competition is held annually by the Navasota Examiner in recognition of outstanding local business.  Local business are nominated and voted by community residents of Navasota, just south of Bryan and College Station, TX.

About the Navasota Examiner

The Navasota Examiner is the local newspaper in Navasota, TX with a history dating back to the 1890’s.  In 1903, the Navasota Examiner and the Grimes County Review merged into a single publication.  The paper’s headquarters were finalized in the 1940’s when they moved to Railroad Street in historic downtown.

Schulte Roofing is also known as the best selection in Bryan roofing contractors as well.  Just recently Schulte Roofing also won the Best of the Brazos Competition by Bryan Broadcasting.  The competition works in approximately the same way; with local residents controlling both the nomination and voting process.

President David Schulte states, “It means a tremendous amount to us to receive the award from the Navasota Examiner.   We believe these awards are a sign of our impact in the local communities that we serve.  It is our goal to continue efforts and provide a rock solid expertise and service that you can rely on, for the life of your home.”

Word seems to be traveling pretty far these days as service calls keep coming from outside of the normal service area.  “We tend to focus on the Brazos Valley and surrounding areas for the most part, but lately we’ve seen a real increase in business from areas just beyond because of our reputation.  It’s expanded our service area and the number of homeowners that we can help educate.” comments Josh Schulte, Vice President.

One of the biggest factors in Schulte Roofing’s success is the guarantees that back their service.  Schulte Roofing is single mindedly focused on 100% customer satisfaction.  President, David Schulte, also believes that this is something that the competition cannot offer.  “No matter what it takes we get the job done right.  Our guarantee program is there so our customers know they don’t have anything to worry about with their new roof.  We want them to be assured for years after we’ve done the installation; their roof is going to perform when they need it the most.”

Schulte Roofing also believes that anyone can put great testimonials or reviews for potential customers to read.  However, they believe that by contacting their previous customers directly, homeowners can get the real story behind a project.

Josh Schulte adds, “Don’t just ask about what the roofing contractor did right.  Ask about what went wrong and how they fixed it.  That’s what makes us so different from everyone else.”

Schulte Roofing is a local roofer serving Bryan, TX, College Station, TX, and Navasota, TX for the last 18 years.  They also bring over 100 years of combined roofing experience with them when they visit your home.  For more information on Schulte Roofing visit their website.